By ‘tipping point’ I mean ‘lightbulb moment’ – the point at which you decide that enough is enough, and it’s time to knock drinking on the head for good.

In fact i’m going to call it ‘shitebulb moment’, because usually a decision to quit drinking is preceded by a bad thing happening. Punching your stepmother for example.

My shitebulb moment was nothing to do with punching anyone.

Around a year ago my missus and I went on holiday. We had an epic road trip planned, driving to the south of France. We stayed in a beautiful little port town called Gruissan, living for a week on a posh yacht that the owners had sailed around the Caribbean for a year, and was now moored up and used as private holiday accommodation whilst it awaited it’s next voyage. We spent long days relaxing on the boat or on the beach, and exploring the town looking for cute little cafes and restaurants to eat in. Alcohol was hardly a feature of the holiday, and I probably only had 2 glasses of wine per day – just with dinner. The fact is that I’d already identified that I had an unhealthy relationship with booze, and so I made an effort to ensure I didn’t spoil the holiday with drunken antics. It was probably the most sober holiday I’d ever been on since being 16 years old.

Gruissan is surrounded by vineyards, and all of the local shops sell locally produced wine bearing a picture of Barbarossa’s Tower, an icon of the little town. 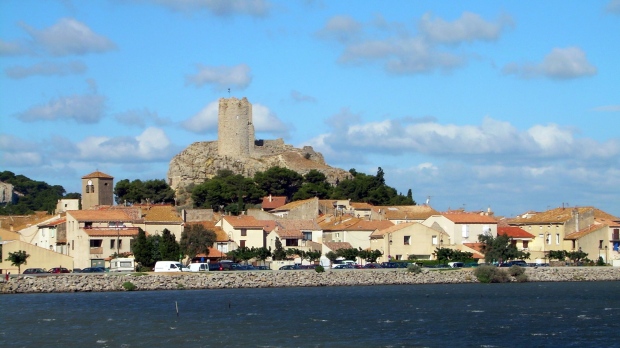 On our last day in Gruissan, before we began our grueling 800 mile drive back to the ferry port in Calais, I decided to visit the local wine cellar. It was ridiculously cheap, with bottles of wine for just a few euros. They had these taps where you could fill up a huge plastic bottle (I think it held 4 or 5 litres of wine) for just 6 euros. Holy shit it was so cheap! I’m ashamed to admit my first thought was “dude, I could save a couple of grand and then just move to Gruissan and live out my days as a drunkard by the sea”.

My missus is clever, and she can tell that me and drink aren’t a good mix.

“Why on earth do you need all of that?”
“It’s just so cheap, and I thought it’d be nice to have something to take back”
“Can’t you just get a bottle?”
“But we can make this last months, and share it with our friends…”

I knew, at that point, that I was lying. I’d had a holiday of abstinence, and I fully intended to go home and get obliterated whilst listening to old The Cure and Daft Punk albums. Addiction and craving had made me lie to someone I loved.

A couple of days later, back in the UK, I drove away from Milton Keynes having abandoned my better half at her flat (this was before we lived together – back in the days of our long-distance relationship), and headed north 150 miles up the M1 to Huddersfield to my empty house, my cat, and my stereo system. I got home, chucked my bags in a heap by the door, and opened the huge bottle of wine.

The next morning I woke feeling like absolute balls. I was still fully clothed, face down on my bed, and my eyelids were stuck together. I’d fallen asleep with my contact lenses in . Shit. Everything was blurry, and I rolled over to see a ton of missed calls from my missus. I pulled one contact lens out no problem, but the other just wouldn’t come out. I pinched and pulled at my eye, starting to panic a bit, but no luck. The thing appeared to be stuck to my eyeball. Then my phone rang again, and I could tell as soon as I answered that she knew something was wrong. She could tell I’d drank the night before, from my voice and my huge oversleep (I’m rubbish at sleeping in). I won’t go in to details about our ensuing conversation, but it wasn’t good. I needed to stop doing this to myself, and she needed someone who had a bit more self respect.

I made an emergency appointment at the opticians, and it was horrible knowing that, as he leaned in close to shine the torch in my eye, the poor optician could probably smell my rank booze breath. Half the bottle had gone, probably over 2 litres of red wine. It turns out the contact lens wasn’t in there, and probably came out whilst I was asleep. I’d been scratching and pulling at my eyeball and had now damaged my eye. What a fucking idiot.

I went home, phoned my boss with excuses as to why I couldn’t come to work for the next couple of days, and just bawled on the kitchen floor like a big fat hairy Yorkshire baby.

I already knew way before this whole debacle that I needed to stop. This just cemented the fact. There had been many occasions previously when I thought I wanted to stop, and even managed a couple of weeks booze-free during an earlier attempt, but this time it was different. I gave my remaining wine away, and made a promise to myself that I was done. No more of this shit.

There you have it; my shitebulb moment. I’ve not touched a drop since.

My eye is also much better now thanks.