A couple of weeks ago I managed to fulfill a lifelong ambition: to visit New York City; touristic centre of the universe, setting for some of the worlds greatest love stories, backdrop to arguably the best movies ever made, subject of a thousand songs, and home to some of the most friendly and colorful characters ever to be squeezed into existence.

My wife and I planned the trip right after we got married last year, and pegged it as a first wedding anniversary treat (albeit around one month too late – but this was on purpose so that we could visit the Big Apple in it’s full Halloween garb).

From the point that my jet-lagged head first emerged at street level, as I stomped up the steps from Lexington Av-53 St Subway Station carrying my suitcase, I was SOLD. Within another fifteen minutes, I was already in love with the whole place. It was just like the movies; yellow cabs dodging pedestrians, steam billowing from the drain covers (that’s where the Ninja Turtles live, right?), and ever-looming skyscrapers that vanished into the clouds above. If a city-boner is a thing, then I had a whopping stonker.

Two things struck me immediately (almost three if you include the car – more on that later)….

In fact, this whole experience would probably never have happened, had I still been a fat northern beer-soaked mega-twat…

We were unlucky enough to have been booked to fly to America with now-defunct budget airline Primera Air. They had already cancelled our original flights, meaning we had to change our departure airport, and then the news of their fatal demise came literally days before we were due to fly. The stress of these flight problems alone would have sent me into stratospheric levels of panic back in the ol’ drinking days. My hangovers never gave me the capacity to be rational and calm about these type of things. I’d have probably gone out and smashed my car into a school because ‘everything’s already fucked anyway whinge whinge moan’.

I managed to sort alternative flights with United Airlines, and get the ball rolling to claim back the £900 I spent with Primera Air, and all seemed cushty for a second until I checked in with our hotel (we had a hotel at the airport in Newark booked for night #1, then the rest of the week at an apartment in Manhattan). The 1-STAR reviews were piling up due to a legionnaires disease scare, with all hotel residents told they couldn’t use the baths or showers. I’d purposefully spaffed some extra wad on a room with a massive jacuzzi bath, so this news was shoving a spanner right up my arse.

In the drinking days this would have probably led me to burn down a church or something. That’s what happens when you fuck with my jacuzzi.

But it was fine. Everything was fine. 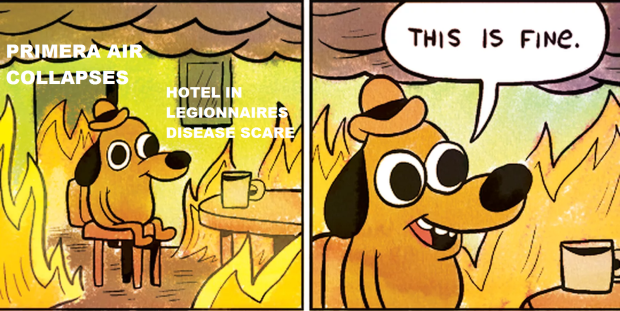 Alternative accommodation was sorted at short notice, and the problems were simply batted away, much like how a fattie would bat away a salad. No dramas, no meltdowns.

After getting settled at our apartment in Manhattan we started a week of full-on tourist action. We spent a day in Brooklyn visiting awesome pizza restaurants and movie locations for classics like Goodfellas, and The Warriors, and Saturday Night Fever. We walked the famous Coney Island boardwalk. We went to Madison Square Garden to watch New York Rangers ice hockey team secure their first win of the NHL season. We went upstate and visited Sleepy Hollow Cemetery – the setting for Washington Irving‘s famous book about the headless horseman who goes around pulling people’s heads off (we got there on a bus via The Bronx, where I’m convinced we came close to getting shanked by a gangbanger). We kicked back in Times Square, and chilled out in Central Park, we walked the High Line and shopped in Chelsea Market – all to the constant hum and non-stop lunacy that lives in the air of New York. It’s like someone is following you around all day with a ghetto blaster blaring out techno remixes of The Star Spangled Banner, and throwing ping pong balls at you whilst you’re just trying to eat.

We even took a helicopter flight up the Hudson River – something which I’d long planned to do as the final nail in the coffin of my fear of heights. Did I shit-out like a big girly wimp? Did I chuff. My fear literally evaporated with the banishing of alcohol from my life three years ago. Mad that innit? You can read more about the helicopter/fear-of-heights thing in an old blog wot I did here.

I enjoyed every second of my time in NY, my elated mood not even being dampened by the constant blaring of the air-con units from the restaurants near our apartment whilst we were trying to sleep, but I genuinely can’t even to begin to understand what an absolute fucker this whole experience would have been for a binge-drinking pissflap with a perpetual hangover…

NY is the city that never sleeps, and holy shit you’d need to be one hardcore bastard to live a party lifestyle in such a relentless whirlwind of mayhem. I was drunk on the buzz in the air. I don’t need no grog when I’ve got this much going on, dude.

So all in all the holiday was everything that I wanted it to be, but also a true testament to how much awesome shit you can get up to when you’re not held back by alcohol. I’ve spent many a city break in amazing places like London or Paris or Amsterdam, where the only lasting memories are made up of scary hangovers – sweaty paranoia and gurgling dread whilst shaking with booze-withdrawals. Hiding under the covers in unfamiliar hotel rooms, waiting for the cleaners to knock on the door and kick you out. 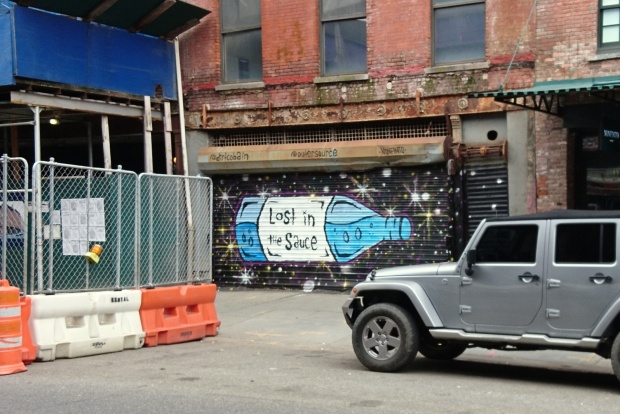 Some graffiti I spotted in NYC. Bang on, eh?

It was an amazing trip, brought into full focus and ultra-HD thanks to the clarity that a boozeless life brings. And aside from all the cool stuff we got up to, there were also two AMAZING things that I need to tell you guys about. Not booze related, and unfortunately not another wanking story (soz), but pretty cool nonetheless…

FIRSTLY: I witnessed a genuine miracle whilst visiting the NHL store, which is a shop just near Times Square where you can buy merchandise from all of the teams competing in the premier North American ice hockey league. This experience was water-into-wine type shit. Hold on to your balls.

I’d decided that I HAD to get myself a New York Rangers baseball cap from the NHL store, especially since we had tickets to go and see them play, but when we arrived they’d sold out. They had caps available for literally every other team, but not the Rangers. I spoke to the guy behind the counter, who said “Unfortunately all stock is oot in the store. They sell oot fast with it being the local team. Sorry sir, have a niiiice daaaay!”

[i think he was Canadian]

…so I went on a recce of the entire store, hoping to find a pile of them hidden next to the t-shirts or whatever, but no luck. I ended up back at the empty baseball cap shelf, staring forlornly at it, and my missus goes “Staring at that empty shelf isn’t going to make some more hats magically appear, you know!” and just then…

A guy appears next to me with a huge pile of them and starts putting them on the shelf.

“Amen!” I told my wife, as I yanked my wallet out of my pocket. “It’s an NHL Halloween miracle. Praaaise the Lawd”.

The SECOND amazing thing to happen was even cooler…

On our very first day in Manhattan, after dumping our bags at our sweaty apartment and heading out for a walk up to Central Park, we had to cross a busy road. No biggie, you just wait for the big red hand to deluminate (is that a word? it’s got a red squiggly line under it so probably not), and for the little white walking man to light up, right? Nope. Turns out the cars there can still drive through the crossings, as long as they don’t squish anyone. I stepped out into the road, paying no heed to any cars that might be approaching, and almost had my toes crushed by an old black Lincoln Town Car which came tear-arsing around the corner and through the crossing. The driver had his window down, and stared at me nonchalantly through his dark glasses as he whizzed past chewing his gum. I stared back at him, head spinning from nearly having the tip of my penis whipped off by a car, and FUCK ME SIDEWAYS if it wasn’t Harvey Keitel. Harvey fucking Keitel. I swear to god. Harvey Keitel. The man himself; star of so many of my favourite movies – Pulp Fiction, Reservoir Dogs, Mean Streets, Bad Lieutenant… and of course, everyone’s favourite car insurance TV adverts.

But hang on a minute Jon you perv! There are 8.6 million people living in New York, and 1.6 million living in Manhattan. This sounds like BOLLACKS. How the fuck do you know it was definitely him?

Good question, thanks for asking. Well… I don’t know for a fact. But it looked exactly like him, and a bit of googling tells me that he lives in that area. You’ll just have to believe me won’t you.

And so, divine hat miracles and The Wolf of Car Insurance aside, my final thought as I boarded the plane back to London, ready for a painful seven hour overnight flight, was ‘Would I ever live in New York?’. Is it somewhere that, given half the chance, I’d ever be happy to call home – amongst the droves of tourists, and to the constant soundtrack of police sirens and air-con units?

Fuck yes. I’d move there tomorrow if only my wife would join me (which she definitely wouldn’t).

But maybe it’s best kept as a treat eh? It’s somewhere I’ve always wanted to visit, and I’m sure I’ll go back, but let’s not spoil it. Let’s not do to New York what I did to alcohol, and turn it from a rare delight into an obsession and a problem.

High fives all around,

P.S – If anyone is thinking of visiting the Big Apple then I can’t quite convey just how much you need to take the ‘A Slice of Brooklyn Pizza Tour‘. Our tour guide Marc was probably the funniest bloke I’ve ever met, and a super nice guy too. Plus, y’know, there’s pizza.