I fucking love this little quote, which famously fell from the lips of legendary ice hockey superstar Wayne Gretzky. Or maybe it was his trainer who uttered it? The details are sketchy, but either way – when used in the context of sports – it’s a cool little line to throw out. In fact, it works pretty well outside of sports too. All it means, in the most basic terms, is that you’ll never achieve without trying. Even if your only aspiration is to win the lottery (you fat lazy money-grabber) then that suddenly becomes a lot less realistic if you don’t buy a ticket. Gotta be in it to win it.

Not sure why I felt the need to explain that to you. Only smart people read this blog right? Good.

If you’re going to put a ‘booze recovery blog’ spin on this quote then there are probably two main angles I can think of:

There are potentially loads more angles but it’s 2:30 in the afternoon and I’m still wearing pajamas, so that should give you a good idea of the level of effort I’m currently willing to expend on this guff.

The metaphorical angle – Basically, if you don’t at least make an effort to get off the booze, then you’re really not gunna manage it. I follow a lot of Facebook pages dedicated to getting off the drink. There’s some AMAZING and very inspirational people on those pages, but there’s also – and this is just my little opinion – a lot of people who like to talk about quitting more than they like to do the quitting. Okay, maybe that’s a bit harsh. The thing about quitting alcohol is that it is simultaneously VERY EASY to do (just put the fucking drink down, dickhead), and also VERY HARD to do (aaaargh I’ve drank for 20+ years and it’s all I know, etc…). This is a proper weird juxtaposition mate, and I can’t think of anything else quite as mind-bendingly odd. Except maybe that video I saw on YouTube a few months back with a chicken wearing blue trousers. That was pretty odd.

Juxtaposition aside, there are successful quitters who are able to grab the whole challenge by the pubes, and just make it happen. These are the ones who shoot for goal. And then there are those that toy with the idea, maybe even say the right things like “yeah I definitely have a problem and I need to address it,” but they aren’t hungry enough for the result, and relapse becomes a frequent thing. They aren’t really making an effort to shoot – just dribbling all over the place (in both senses) – and so a wicked slapshot into the back of the net is never going to be forthcoming. Personally, I think this is a symptom of trying to quit before you’re ready to quit – usually because it’s what someone in their life wants, but not what they personally want. It’s near-on impossible to quit when you don’t want to – trust me I’ve been there. 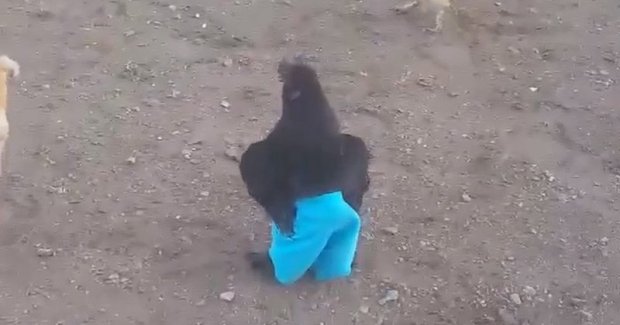 So anyway, ignoring the chicken wearing blue trousers, the saying “You Miss 100% Of The Shots You Don’t Take” can be applied pretty directly to the act of quitting drinking. Agreed? Agreed.

The literal angle – So this is another brain-melter. Literally: Every time you DON’T have a shot, of vodka or whisky or whatever your poison is, you WILL miss it. Is that correct?

If I was sat in a bar right now, let’s say maybe it was one of those cool studenty bars in Manchester that I love oh so much, and I was offered a shot of ice cold Jagermeister, I would say NO! I’d be polite about it, but I’d have to decline. Why? Coz I’m an alcoholic (have you literally not understood any of my blogs?). Would I miss it? I think so yes. At that very moment in time, I think I would look at that lovely cold shot, and fleetingly reminisce over the good times me and Jager have had together. I’d think about the time he got me to take my shirt off at a 90’s clubnight and dance on the table, kicking drinks everywhere, or the time he convinced me to climb onstage and try to grab the mic from MC Devvo whilst he was performing live at a pub in Wakefield. I’d remember the times we have laughed and cried together, and the camaraderie he always brought along to the party. Yep, Jager was a pretty cool guy. At this point, yes, the saying “You Miss 100% Of The Shots You Don’t Take” is correct.

But what about when I wake up the day after, having said NO to that shot? We all know where that story COULD have led. I’d have had another, and another, on and on into the early hours, and eventually woken up feeling like absolute cat shit. Dry mouth, busting for a piss, can’t move, empty wallet, fully unrested, and stinking of stale booze and fags and sweat. The day would be written off, and to be fair I may as well take the easy route out of this hangover by jumping back on the bus to Party Town.

Suddenly I’m glad I said NO, and I don’t miss that shot I never took. You, Mr Gretzky, are mistaken sir! You DON’T miss every shot you don’t take!

The conclusion? Well, Wayne Gretzky was talking about ice hockey, not drinking, so any conclusion here would be total bollocks and completely irrelevant. Business as usual for SoberPunks then.

There is, however, a question which I think it’s worth raising before I wrap up this confusing and quite sketchy blog…

Do piss-heads ever look back on the previous night’s drinking and say “YES! I’m glad I got drunk last night! I’m glad I spent loads of money on dulling my brain power!”?

Imagine if you could hit a huge magic button right now that would jump you to a timeline where you didn’t drink, and never had done. Suddenly BOOM you’re richer, thinner, fitter, and every decision you ever made was much better. Booze must be one of the few things you can buy that’s only purpose is instant gratification with no benefits…

See the point I’m making? No wonder kids are statistically drinking less than we did in the 90s. They’re learning from our bad choices. Drinking, curtain haircuts, and Eclipse jackets – all peaked in the 90s and then started to decline.

Hopefully the next generation will view man-buns and those drop-chest men’s vests with the same distain.