It’s true. It’s one thing about drinking that is never disputed. Alcohol contains calories, and if you stop drinking then you will probably lose weight – unless you replace the booze with cakes and soft drinks.

The thing is though: It’s actually a double-win. Booze makes you fat, but it also makes you lazy. By stopping drinking you’re not just going to lower the calories you take on – you’re also likely to increase the calories you burn. If it’s your addictive personality that got you into this situation, then I guarantee it can also be your saviour. Fitness is just as addictive – and for me it’s running and climbing. I’ve had a proper fitness boner ever since quitting the booze.

Not an actual boner. That would totally get in the way when I’m climbing.

My advice for anyone stopping drinking would be to spend a few months resting. Look after yourself, eat the food you want to eat, and focus on just being comfortable in your own skin. It can be a massive adjustment period, and I think it took me a good 6 months to start feeling ‘normal’. This can be a shock to the system – especially if, like me, you were in your teens the last time you were this dry. But then things will happen. You’ll start making other small adjustments: getting out more, eating the right stuff, creative pursuits. It’s amazing the number of doors that open once you stop drinking, and for a lot of people fitness becomes a whole new addiction. Embrace it.

Here’s an interesting article I came across, which compares photographs of people before and after they quit drinking: http://www.boredpanda.com/before-after-sobriety-photos/

Also, here’s a couple of photos of me for comparison. The one on the left was taken 2 years ago on holiday in Portugal, the one on the right was taken yesterday in St Albans. Not the most easily comparable pictures, but hopefully you get the gist. 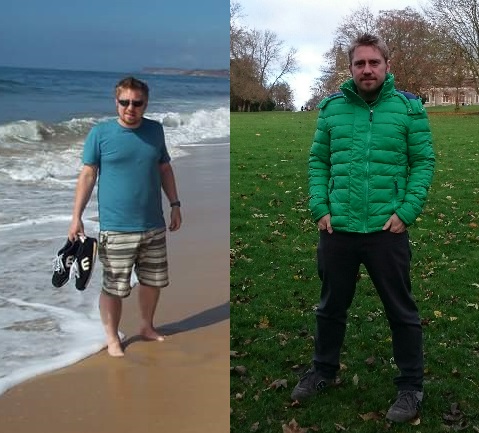