Okay, so last night you REALLY fucked up. You’ve woken up in a bad place – possibly both mentally (oh the paranoia!) and geographically (wtf why am I in a zoo!) – and you’ve finally decided that enough is enough. The booze buzz is more hassle than it’s worth. You’ve ruined too many relationships, wasted too much money, knocked over too many tables, bruised too many knees, and shagged too many mingers.

But the problem is that alcohol is a devious bastard, and if you’re not on full alert then after a few days off it you’ll start to feel better and start kidding yourself that last weekend was ‘just a blip’ and that you ‘don’t normally attack bus drivers’, and you’ll consider returning to the pop and starting the charade all over again. Or even worse, if you’re anything like I used to be, you’ll reach out straightaway (like, by 11am that same morning) for another drink as a shortcut to dealing with the nasty hangover. Trust me – this is one of the worst decisions that anyone has ever made ever (including that time that Blockbuster video turned down the chance to partner up with Netflix). All you’re doing is postponing the inevitable for another 24 hours, and when that baby hits it’s gunna be twice as painful and twice as messy. The hangover equivalent of a sneezy puke-fart. 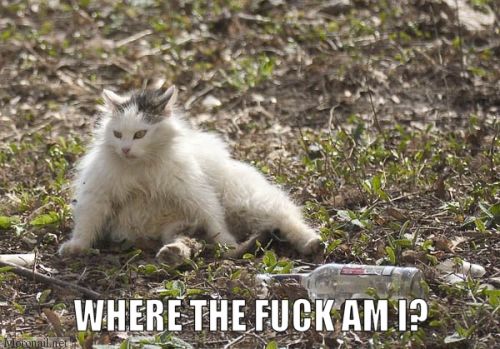 Nope! You’ve made your mind up! Today is the last time you’ll ever say I’M NEVER DRINKING AGAIN, and the first time you’ll actually mean it. You’re strapped in for the long haul, and ready to go 100% sober, but hang on! One quick question… HOW?

Well, lucky for you (you lovely bastard) I’m here to help. I drank my last drink nearly 4 years ago, after a TON of false starts and broken promises, and so I absolutely know how hard the struggle is, and also how much of an alluring piece of shit alcohol can be. It’s like a beautiful woman that seduces you into following her down an alleyway, only to reveal herself to be a huge bloke with a skinhead that wants to bugger you with a cricket bat. Get off me alcohol you perv!

So, just a quick word of warning before we submerge ourselves in the cooling lagoon of questionable advice: If you have the kind of serious alcohol problem where you can’t stop drinking without serious withdrawal symptoms, such as bad shakes, seizures, hallucinations, or debilitatingly dark and depressing thoughts, then skip my advice and see a doctor immediately. I’m not a health professional; just an ex-pisshead with a few badly formed ideas about getting sober (although I will do you a vasectomy in my shed for a fiver).

Stop looking so sad and come and sit on your uncle Jon’s knee. I’ll fix yer.

Follow this QUITTING BOOZE DAY ONE ACTION PLAN to the letter, right now, and I guarantee that come tomorrow morning you’ll already be feeling better about things. Beyond that, there is a multitude of advice out there. See here for more guff from me about remaining sober. I’d also recommend joining a few Facebook groups – there’s some amazing support out there. And what if all else fails? Well drop me an email on here, or join our cool little private sweary Facebook group here. I would never have reached four years sober without the support of other people, and I wouldn’t expect anyone to walk this scary new path alone.

Now stop feeling sorry for yourself and GET TO IT you special bastard.

The biggest and sweatiest of hugs.

2 thoughts on “Woken Up In A Bush With No Trousers? Here’s Your ‘QUITTING BOOZE DAY ONE ACTION PLAN’”