Okay, full disclosure; it wasn’t a hangover, but holy freakin’ novelty shitballs did it have all the attributes of one: Brain fog, dehydration, jitters, horrible gurgly stomach, daunting paranoia, cold sweats, yep… the works. Oh and I also had somewhere very important to be where I was expected to be well turned out, sparkly eyed, and ON IT like the, er… Wallace and Gromit.

A couple of weekends back I went to see an awesome Canadian hardcore punk band play at Milton Keynes’s coolest little sweaty live music venue, The Craufurd Arms. Cancer Bats are a powerhouse of a band, and a huge amount of crazy, bouncy fun, topped with a sludgy layer of sweating and spitting and tongues waggling about. These guys are fucking ace, notable not only due to their turbocharged records and insanely good live shows, but also because they are total fucking workhorses; they spend the majority of each year touring, they set up all their own equipment before each gig, they do their own soundchecks, and they make a point at every show of manning their own merch stand and meeting every single one of their fans that wants an autograph or a cheeky selfie.

The gig came and went, and the rest of the weekend passed in a blur of pizza and ice hockey, followed by a trip to the cinema to watch M. Night Shyamalan’s new superhero movie, Glass, which was cool – if not only coz you get to perv at James McAvoy in a flowery dress. Phwoar.

After the movie, the walk from the cinema to the car was memorable for two reasons:

“Fuck!” I told the missus. “I reckon I’m coming down with something. My throat is sore…”

“It might have been that gig,” she said. “We were surrounded by fat, sweaty blokes sneezing and coughing.”

“How cool was that spin-fart though? I have so much respect for that kid right now,” I told her.

She didn’t have to say anything. I knew we both felt the same, as she looked lingeringly into my eyes. That kid was just the coolest.

We gently fist-bumped, and climbed into the car.

I woke up the next day feeling like a bucket of arseholes. I have this nose problem, seemingly a family thing since my brother and both of my parents have needed operations on their noses, and it manifests itself by completely closing off my left nostril at even the sniff (sniff!) of a cold. I’m lucky that I can work from home if needs be, so I spent the Monday in my pyjamas, swinging between huge coughing fits and the fevered sending of garbled emails. By Monday afternoon the many nose sprays and drugs were kicking in, and so when my boss messaged me to ask if I’d be okay for our client meeting in London the next day I was all like ‘Yep! Don’t worry I’ll be fine!’ When really I should have said ‘Nope! Absolutely not! I feel like James Cordon is sat on my head!’. 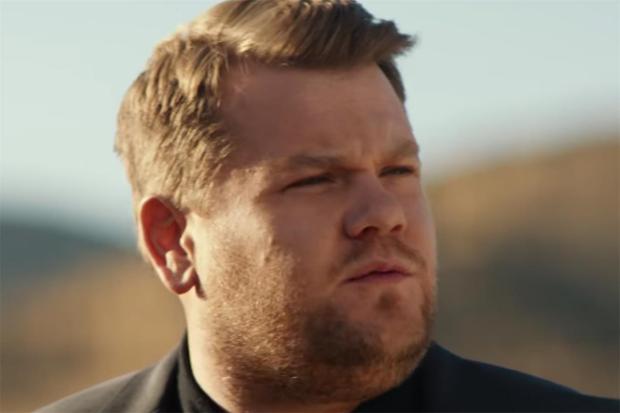 Nobody wants James Cordon sat on their head. Nobody.

That night I hardly slept, and when my alarm went off I quickly realised that I’d been sleeping with my mouth wide open, since my snozz was fucked, meaning that my mouth was bone dry. I felt horrendous, but it was too late to back out. I’d made a commitment to get to London, and by God I was gunna get there. I stood in the shower gently sobbing, then forced down a bowl of muesli and dug out my solitary suit.

On a side note: I HATE wearing suits ever since I worked for this absolute joke of a company in Manchester called Think Money. I used to think ‘business clothes’ were a necessary evil in my line of work (project management), but after working in that shithouse, amongst all the ego-maniacal power-dressers, I just view it as a bit of a tosser-costume for the senior managers with no skill, and a prison outfit for the worker bees grafting away below them. A uniform designed to strip you of any home comforts or feelings of individuality. YOU BELONG TO US NOW JONATHAN. SHINE YOUR SHOES IF YOU WANT MORE MONEY. ALL TATTOOS MUST BE HIDDEN. ANY GLIMPSE OF YOUR PERSONALITY IS A SIGN OF WEAKNESS. Honestly… the rules that that place had were MENTAL: All men had to wear a full suit, including jacket and tie. No brown shoes allowed, only black. You had to be either clean-shaven, or have a full beard – no stubble. Blokes used to take a week off just to grow a beard. Also, because all tattoos had to be hidden, we had a whole raft of staff with inner wrist tattoos who covered them up with plasters or bandages. It gave the impression that a disproportionately high percentage of the workforce had attempted cutting their wrists, which is probably quite ironic, since most of us were verging on suicidal by the time we left. Thankfully my current workplace believes in expression of individuality, so suits are only required when meeting with clients (and even then it’s not necessarily mandated). It makes for a much more creative and homely atmosphere, and the difference is palpable. People are HAPPY and can be THEMSELVES. It’s worth a lot, at least to me, to be able to feel so relaxed in the place where you spend half of your waking hours.

I drove to Central Milton Keynes train station in my posh suit, and spent at least ten minutes sat in my car, in the multi-story, trying to muster up some feeling of humanity. My brain just would not kick into gear. I ran through the meeting agenda on my phone. Nothing made sense. My brain was just a foggy mess. ‘Come on Jonathan! Force yourself!’.

My journey from the car to the train, and from the train to Euston, and from Euston to the underground, and from the underground to the office in North Greenwich, all felt like I was floating along in a bubble. I could feel the pressure inside my head, and it made everything sound distant and muffled. I was thirsty. I was hungry. I needed a poo. I needed to sleep. I wanted my wife to come and rub my head (my forehead, you pervs).

The meeting flew by, and I took nothing in. Honestly, I don’t remember a word that was uttered. I just sat there, sweating, trying to look like I wasn’t dying. But also I felt this weird thing…. I felt… guilty!

Why did I feel guilty?

I pondered this question on the way home, as i ducked and dived through the crowds of rush-hour London, and as my train pulled back into CMK it hit me (the answer, not the train). I felt guilty because all of my previous memories of feeling this way at work, of winging it in meetings, and wanting nothing more than to NOT be there, and of ‘popping to the loo’ just so you could sit for ten minutes with your head in your hands… all of these soul-destroying moments from my previous life had been self inflicted! That’s why they brought about feelings of dread and guilt!

This is how ALL of my meetings used to feel – the confusion, the dehydration, the cold sweats – and it was because I used to always be hungover for them! For years, before I quit the drink, my life was just a series of hungover meetings, separated by little pangs of drunkedness.

Suddenly I’m transported back to a memory which still stands out as one of my most panicky work moments ever. I was working, years ago, for a huge company where I had responsibilities across an office in Halifax (where I was based) and an office in Norwich. I usually travelled to Norwich about once a month, and spent a couple of days there. On this particular occasion I’d arrived on the day of some huge football match. England were playing, so I was invited along to the pub with the guys from the office. They were there for the football, I was there for the beer.

I had a good skinful of Kronenbourg, pints and pints of the stuff, and preceded to make a bit of an idiot of myself by getting all obnoxious, and forcing shots of Sambuca on people, despite it being a school night. I was properly wasted, and after everyone else drifted off home, I staggered back to my Premier Inn at some ungodly hour. I had an easy day tomorrow, and planned to just toss it off for a few hours before jumping in the car and heading back to Yorkshire.

The next morning I walked into the office, and the office manager goes “Morning Jonathan. Good night last night? I’m glad you’re here – we’ve got twenty trainees sat through there and I’ve told them you’ll pop in to talk to them about who the Financial Services Authority are, and why it’s import that we blah blah blah blah…”

OH FUCK. I AM LITERALLY MORE HUNGOVER THAN A BASTARD.

“Yep cool, I’ll just grab a quick drink of water (manically chug three pints down and have a little cry in the bogs) and then I’ll pop in to chat to them.”

I can only imagine what it must have looked like to the poor trainees. Who’s this wobbly, sweaty guy they’ve wheeled in? Why’s he shaking, and why does he stink like a fucking brewery?

I stuttered and fumbled my way through an unplanned, appallingly presented 30 minute talk that was just total bollocks. My brain was completely disengaged, so I just rambled on, sticking as best I could to the intended thread of the chat. After blurting out a load of inane bullshit I looked up and across the room, to see a load of confused looking faces, blinking and wide-eyed, staring back at me. Some of them looked actually a bit concerned (about the subject matter? About this fat guy dying before them? Who knows…). Sweat was rolling off me. The smell of alcohol was emanating from my every pore. I was a mess.

I waited for half a second.

“Good! Nice to meet you all. Byeeeeee…”

And I was out of there, fast as a shot; out of the room, out of the office, into the car, and onto the A47 out of Norwich. Vroooom. Fuck that place. Fuck those people.

My experience in London, trying to stay alive throughout a meeting where I felt like death, was both a horrible experience, but also a bit of a well-needed reminder. It reminded me of how bad things used to be, and made me realise just how far I’ve come. Above all, it brought home just how precious your sobriety can be. I used to think sobriety would be all about the never-ending yearning for booze. Certainly, this seems to be (in my experience) the way that AA would have you believe it works. But would you believe it? I wouldn’t go back to that lifestyle for any money. Booze isn’t something I miss, it’s something I escaped from.

I can’t believe that it took a nasty cold to remind me of my drinking days. What does that say about booze??

Going from perpetual drunkenness to sobriety is like gaining a superhuman power. Like being able to lift cars, or fly, or see through buildings, or the most powerful superhuman power of all…

Bring it in for hugs xoxox

11 thoughts on “My First Hangover In Almost Four Years”