Not many males, at least according to my Facebook feed at the weekend, are fans of Royal weddings. Some blokes, unhappy with the option of simply not watching the wedding of Harry and Meghan, have even gone out of their way to prove how anti-Royal-wedding they are. Banners have gone up, and anti-Royal rants have been scatter-gunned across social media, and that’s all fine. I know there are politics involved here, what with the spending of taxpayers money versus the tourism trade the Royals bring in. It’s not a debate I want to get into, or care enough about to discuss, but it’s one that rages on nonetheless. So, given my general disinterest in the whole thing, I was quite happy with the idea that I might have it on the telly in the background, but would also gladly miss the entire thing pending motivation to hit the climbing wall, or go shopping, or grind through some more matches on NHL 18 on my dusty PS4.

One thing I’d completely forgotten about however, and only realised towards the end of last week, was that whilst the happy couple would be making their way to whatever fancy chapel they were getting hitched in, I was booked in for an appointment to have my balls mangled at the local ball-manglers. Oh dear! There are definitely other things I’d have rather been doing than watching the wedding, but testicle-butchery is taking it to extremes!

Potential agony and Joe Pasquale-esque voice aside, getting the snip has always seemed like an obvious choice for me. When I first met my wife we were both already in our thirties, and at that age it’s important to have the ‘do you ever want kids’ chat as early as possible. We had the chat on our first date as it happens, quickly establishing that neither of us are the ‘parenting type’.

“If I want sticky chocolate fingerprints all over my leather car seats,” I told her, “I’ll goddamn put them there myself!”

“Damn right!” she nodded approvingly, and with that the decision not to procreate was sealed.

As it happens, the whole vasectomy process went pretty smoothly for me. You hear horror stories about hugely swollen plums and whatnot, but given the vast numbers of men that get it done there are bound to be the odd few that don’t go perfectly to plan. It wasn’t a particularly pleasant experience, with lots of pulling and snipping and weird smells, but I distracted myself from the worst bits by babbling incoherently at the poor nurse whose job it was to keep me calm and happy.

Right before my op, as I sat in the waiting room of the ball-manglers dungeon (the ‘clinic’), glancing around at all the other guys sat there looking sheepish and worried, I spotted a young lad that looked rough as arses. His missus was eyeing him concernedly as she rubbed his back, and I concluded that – given it was 10am on a Saturday morning – he was probably hungover. And then I was struck by a truth that I hadn’t thus far considered: I wasn’t scared! I was okay! Drunk Jon, however, the version of me that vanished in late 2015, would have been HUNGOVER, and TERRIFIED, and RUNNING FOR THE FUCKING DOOR! Possibly with my Y-fronts around my knees and being chased by a Doctor waving a scalpel, or a cricket bat, or whatever it is they use (I didn’t look – the smell of burning flesh had already turned my stomach enough thanks). 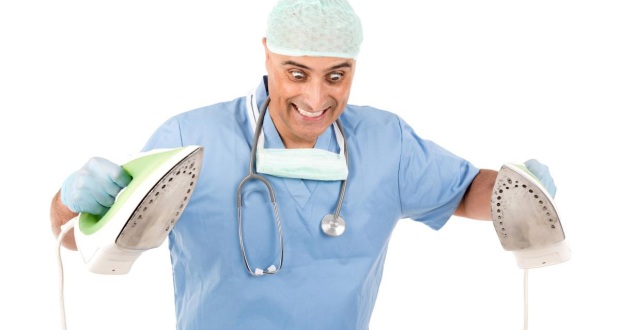 I’ve talked in my previous blog posts about how less-daunting life becomes, or at least became for me, after going sober. The main examples of this are probably public speaking, and a fear of heights – both of which I’ve tackled without much of a fuss in these last few years. I’m glad I can add ball-mangling to my little list. It may not be a big thing, especially considering some of the shit that people have to go through in life, but to me it was a big step towards manning up and being less of a little bitch.

Just going back to the poor hungover (probably) guy sat in the waiting room; I happen to know that drinking alcohol thins your blood, and so can only assume that his little operation may have resulted in a proper bloodbath. Possibly nappies for three days. My blood is presumably of a normal consistency, and even my pants looked like a murder scene by the time I left the surgery. Grim.

And so, by the time Harry was pushing his ring slowly down onto Meghan’s finger, I was sat back at home with an ice pack and a bowl of soup. Two days later and I’m already feeling less sore, although I don’t think I’ll be squeezing back into a climbing harness for a few weeks. There’s a whole world of things that could go wrong there. My butchered remnants are shrinking just thinking about that one.

These days I live in constant amazement at the things you can achieve when you give up the drink, and at how the most seemingly-terrifying things become much less daunting when a bit of calm logic is applied. It’s small steps I’m taking, but I rarely find myself saying NO these days to the things I would have never entertained in my previous life. People often talk about sobriety as a gift, and despite my initial reservations about this type of cheesy guff – especially when emblazoned across a picture of a fucking waterfall or a rainbow – I have to say that it’s starting to really make sense. These last three years have seen me achieve more than I did in the previous ten, and that was down to one thing, and one thing only: Stopping the booze, completely.

Quitting alcohol well and truly gave me my balls back.

Unfortunately it then mangled them.

7 thoughts on “No Booze, No Fear, No Heavy Lifting For Two Weeks”